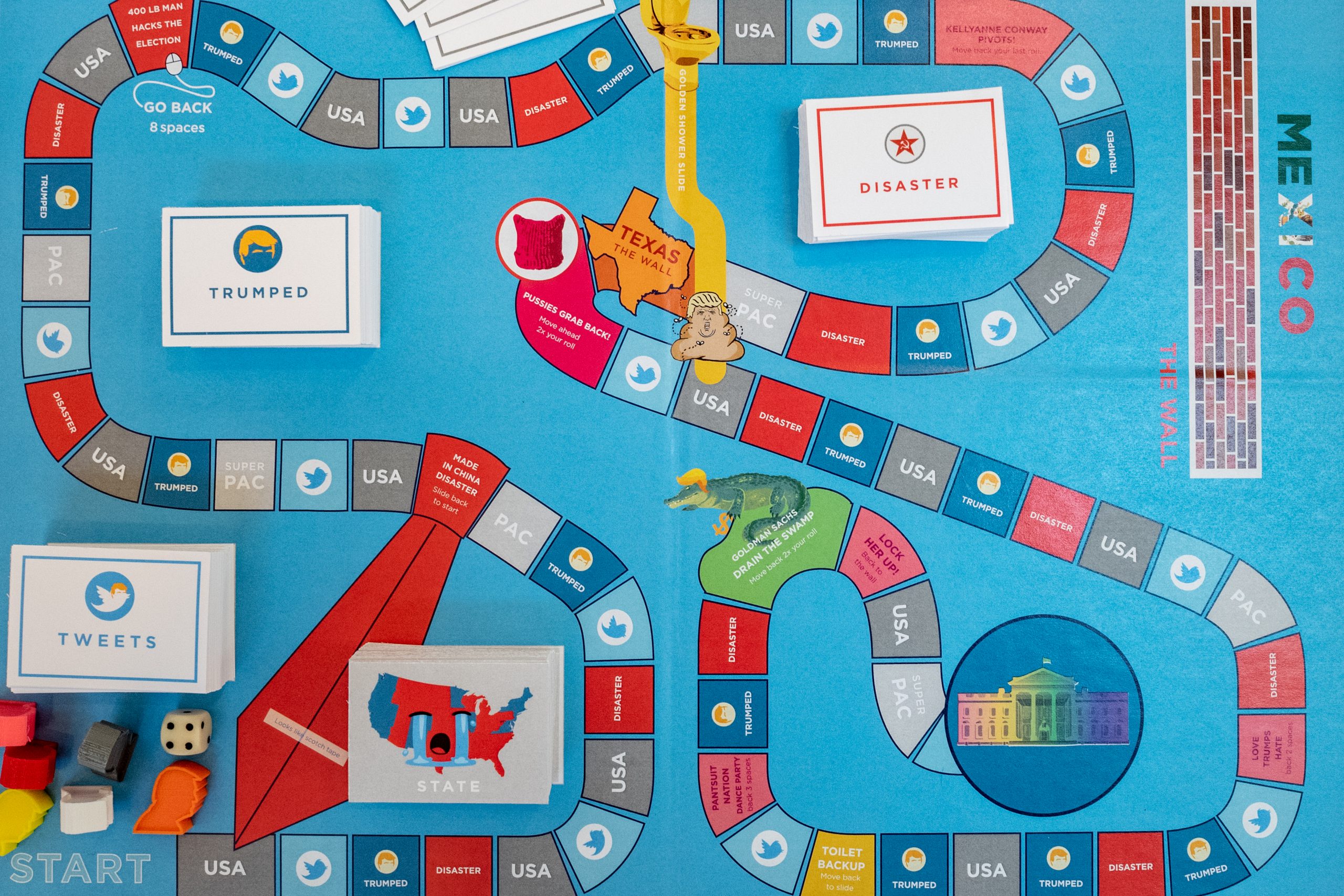 1. Read ALL the rules before you start the game.

2. Take California out of the USA STATE card deck and place it at THE WHITE HOUSE. 55 electoral votes.

3. Shuffle all the deck cards separately, and place the TRUMPED, DISASTER, TWEET, and USA STATE cards on their designated spaces.

4. Choose a Chinese banker. They do not have to be Chinese.

5. Each player chooses a playing piece and places it on START. The banker hands out 2 STATE cards from the top of the deck, 1 PUTIN card, and ¥200,000 from the bank to each player, starting on their right.

6. The last person to send or look at a Tweet starts the game.

7. Roll the die and play your turn until all moves are complete, then move clockwise to the next player. Ex: if during a player’s turn they are told to move ahead two spaces and land on a TRUMPED card they must do what the card tells them and continue play until that turn is completely over.

If there’s something strange... In your neighborhood Who you gonna call? Vlad Putin!

Any player in trouble may call in their PUTIN favor. The PUTIN card may be used at any time during the game. The PUTIN card can be used to cancel a DISASTER or a TRUMPED card. It can prevent players from going to THE WALL or even block another player from getting a STATE. It can cancel another player’s roll, even to enter THE WHITE HOUSE. And yes, players CAN PUTIN a PUTIN. Use the PUTIN card wisely. Once a PUTIN favor is called in it is officially dead and must be discarded and placed on the matching card emblem on the game board.

Players who land on a TRUMPED square must draw a card from the top of the TRUMPED deck and do their best DJT impersonation from the quotes. These are real quotes delivered by you-know-who. After the impersonation, players must do whatever the card says. Whether rolling again or moving backwards or forwards etc., continue play until the turn is completely over. When finished, place the card at the bottom of the deck. Players told to hand over a STATE who do not currently hold that STATE must pay ¥50,000 to the bank. Players who must pay a fee without sufficient YUAN must put a STATE of their choosing back into the STATE deck.

Players must do whatever the DISASTER card says (unless, of course, they play the omnipotent Putin card). Whether rolling again, moving backwards or forwards, players continue doing what each new square says until the turn is completed. Once finished, place the card(s) at the bottom of the deck(s). As per TRUMPED cards: players told to hand over a STATE who do not currently hold that STATE must pay ¥50,000 to the bank. Players who must pay a fee without sufficient YUAN must put a STATE of their choosing back into the STATE deck.

When players land on a TWEET space, the person to their right reads the top card out loud without letting anyone see. These are not fake Tweets. If the player correctly fills in the “BLANK” they receive a STATE from the top of the deck and ¥50,000 from the bank. Once read, place the card at the bottom of the TWEET deck.

The deck holds 51 USA STATE cards. Players who land on a USA square may draw a STATE from the top of the STATE deck OR purchase STATES from other players. The only time players may purchase STATES is when they land on a USA square. Players may purchase as many as they want from as many players as they want, SO TAKE ADVANTAGE! Other players have no choice but to sell (unless of course, they choose to call in a PUTIN favor). The STATE’s ELECTORAL COLLEGE points and cash value are written on the back of the card. Pay the player that exact amount. All players must be able to see all STATE cards during the game. Stealing is the new sharing!

Players sent to THE WALL must go there and stay there. It’s The Wall! Their turn ends. They have three chances (one per turn) to roll a one. Players who roll a one escape from THE WALL and go directly to TEXAS and continue play. After three turns, if they still do not roll a one, they may escape to TEXAS and resume play on their next turn. Players who land directly on TEXAS lose a turn.